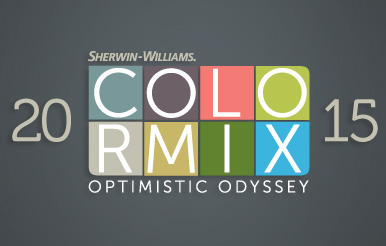 Sherwin-Williams 2015 ColorMix – Predictions Are Out

Home » Sherwin-Williams 2015 ColorMix – Predictions Are Out

For designers, specifiers, and architects, the suspenseful wait is finally over. The 2015 color trends predicted by Sherwin-Williams were announced last week at the 2015 ColorMix, hosted by Sherwin-Williams and Hester Painting & Decorating in the Merchandise Mart. Sherwin-Williams came up with four color stories that they think will be the most popular colors for the upcoming year based on what they see portrayed around the world.  Around this time of the year, Designer Marketing Manager, Jessica Letchford travels around the country to present the predicted 2015 color palettes and Chicago is her last stop for the 2015 ColorMix. Last year’s palette was kind of depressing, a damper, which reflected the way society was at the time. This year’s color palette named Optimistic Odyssey reflects on the uprising in jobs, economics, and our society. “Colors don’t come and go they evolve over time”, said Jessica Letchford, as she opened up her presentation. These four-color stories you can find to be driven by mathematics and economics, diaphanous developed by the spirituality, and curiosity driven by weird sciences. Each color story was inspired by drivers and influencers

that gives reason to why these colors were chosen.

Chrysalis, the 1st color story of 2015 ColorMix, was inspired by the beauty and patterns of earth and the sky. Tiempo Giusto, which means Right Tempo, is the first driver and is also seen as a lifestyle movement. This color story shows that over the year, too much has piled on our plate, and we seek time to balance our lives, and in order to do that we need to take certain things off our plate. Some of the next drivers were Earth’s Natural Striation, Geometric, and Soft Focus. As we begin to balance our life more and more, we start to take time to appreciate the tranquil beauty, finding beauty in Earth’s irregular lines and the symmetry of shadows.  Another driver is Extreme Monochrome, encouraging the idea of metamorphism as our society and earth goes through changes. Influencers included Jean Girel, Seramist poet and technician, Yasuaki Onishi, who concentrated on vertical volume and vertical emptiness, Nao Tamura, who keeps a balance of innovation and beauty, and Roger Callios.

In the 2nd color story we go where no person has gone before, on a bold voyage through the supernatural and magical. Color story two, Voyage, shows that sciences outside our earth that used to be unknown, unexplainable are now part of our reality.  Our first driver is Space Tourism and Planetary Pioneers. Some believe by the year 2030, 250 – 3000 people will travel to outer space to live on the 4th moon of Jupiter. This is a perfect example of how far we have developed through the unknown as we continue to take on new supernatural challenges. During this time solar activity begins to peak bringing color combinations from out of this world. As we find many of these inspiring colors up above, we have unbelievable views underneath the waters. Underwater development has allowed us to explore the beauty under the ocean waters and into the beautiful multi-color reefs. Some other drivers were experiential installations and art, and television and cinema. We see more and more sci-fi films coming out, one of the big influential films being Star Wars. Influencers for the Voyage color story are Richard Branson, Eric Levy, Lady Gaga who had that music festival when the spaceship launched, and Alexander Savanof, an underwater photographer. There was also Jason De Caires Taylor who naturally created beautiful reefs under water on his sculptures he made.

Buoyant color story brings us hopeful signs of expansion, good spirits, so we can expect lots of floral designs and tropical prints. We explore the rainforests applying its medicinal and cosmetic beauty.  Vintage floral wear are making a comeback, especially for men. Buoyant is driven by new optimism. “Logic will take you from A – B, Optimism will take you everywhere.” Botanical fixation and engineer nature which shows the combination of science and art will bring new material, designs, and texture. Another driver is Green Space, which is vital to sustainability.  Influencers of the Buoyant are Takaya Hanayushi and Josef Frank who are big encouragers of the floral design. Ellie Cashman gives a modern and majestic interpretation for the color story and The Mashpi Project influences the building project of the future.

This brings us to their 4th and final color story of the 2015 predictions.  Unrestrained color story shows life as a carnival or celebration, taking inspiration f

rom bold ethnic colors. The art scene and unexpected humor take colors and twist them into combinations. Some drivers of Unrestrained are Heirloom Modern and Humor Me. We need to be genuine and stop taking life so seriously. This driver brings funny names to chairs or fun ideas for furniture such as the floating chair. Mural and Street art, and Africa and Latin America also drove what this color story came to be. Larger than life work, like graffiti, plays a big part. It showcases local goods to global markets and cultural decisions. The last driver is the concept of Gypset lifestyle, a combination of Gypsy and Jetset. Go to Gypset.com to find what makes this a lifestyle. The influencers of Unrestrained include the founder of Gypset.com, Julia Chaplin.  The other two influencers are textile designer Camille Walala and Kristen Markel.

In addition to Sherwin-Williams presentation, with each color story shown, Hester Painting & Decorating made dry erase boards with the new Sherwin-Williams dry erase paint, using one color from each color story. Leaving the boards at the tables with markers, attendees were able to sit and write on them to experiment a little during the presentation. The designers were so thrilled with the idea that some were on the phone right after the presentation talking about it with associates. The new Sherwin-Williams Dry Erase Coating will surely be a hit for them. This being the third year Hester Painting & Decorating hosting the ColorMix 2015, they continue to draw the attention of more and more designers and architects in the Chicagoland area.